A Study in Search of a Global Perspective

During the last decade, the geopolitical environment has changed significantly, and it is expected to change even more quickly in the years to come. Nations and military organizations have been forced to address, on a nearly daily basis, how the rapidly changing global environment might affect their own strategic vision and the Future Operational Environment (FOE) is subject to the instabilities associated with global interactions. The European Environmental Agency assessment, completed in 20141, identifies five distinct global megatrends as FOE-influencing factors: political, economic, social, technological, and environmental. Within these trends, the FOE is expected to be disproportionately affected by technological and environmental sectors, but will also be influenced to a lesser degree by the political, social and human sectors. Economic trends might have corresponding consequences, directly or indirectly, for the developments and requirements of future systems and capabilities, such as Artificial Intelligence (AI), robotics, engineering, communications, human performance and leadership. As Joint Personnel Recovery (JPR) activities occur across the full spectrum of operational environments, a well-informed understanding of the current ‘big picture’ about the JPR world, as well as elements likely to arise in the imminent future is undoubtedly an indispensable condition for success.

One of the most imperative responsibilities of an operational Joint Force Commander (JFC) is the protection of his most valuable asset: the people in the Joint Force. As stated in the Multinational Capability Development Campaign (MCDC) 2017–18 project, ‘In order to be most productive and effective, people who are sent into harm’s way must have confidence that if something bad occurs, their unit, organization or government will do the utmost to find and bring them safely home.’2

Contrary to what one might expect, and according to numerous observations generated by the JPR community in various ways, it seems JPR operations are not always given, in general, enough consideration during initial planning phases. However, should personnel become isolated during contingency or other operations, then such consideration quickly becomes imperative for a Commander. A person or a team that becomes isolated initially presents as a tactical problem, but as history has demonstrated, their isolation can quickly develop into a scenario that might have strategic effects on a nation’s and/or coalition’s operational ability and more importantly, on its resolve to continue with the operation.

The 2011 Joint Air Power Competence Centre (JAPCC) White Paper ‘Personnel Recovery, That Others May Live to Return With Honour – A Primer’3 provides an overview of the history and conceptual developments of Personnel Recovery (PR). Over the last few decades high profile events involving isolated personnel or hostages have had a significant impact on opinions of the general public. Some of these situations caused political embarrassment and significantly altered or ceased military operations due to sensitivities tied to public perception. Because of the expanse and accessibility of the internet and social media, news travels around the globe much faster now than in the pre-internet era. People receive more detailed information faster and become more and more aware of rescue cases.

This begs the question, ‘Is the global JPR community well-positioned to successfully prepare and execute multinational/coalition JPR over the next two decades?’

The MCDC is a United States Joint Staff, J7-led programme consisting of 23 partner nations and organizations focused on developing non-material solutions to capability gaps for Joint, Multinational and Coalition Operations to meet present and future needs of the United States and mission partners. The previous JPR-related project in 2017–18 was aimed at improving capability, capacity, and interoperability of JPR in combined operations planning and execution and delivered a first of its kind product, incorporating research, analysis and expertise to construct a nation-agnostic global JPR guidebook.

The MCDC 2019–20 project is the perfect mechanism to formally launch a unique partnership between the US Joint Personnel Recovery Agency (JPRA) and the JAPCC. The JPRA is the designated project lead and engaged the JAPCC to support, as ‘de-facto’ co-lead, considering the JAPCC an excellent source of relevant expertise.

During two Cycle Planning Workshops (CPWS), the composition and overall concept plan of the project was set. Again, 21 additional motivated nations and organizations committed to supporting the project with varying levels of participation, whether as contributors, observers, supporters or co-leads.

The team focused their attention on defining the purpose of the initiative, starting with the building blocks of a basic quad chart to identify a coordinated problem statement and, ensure a common vision/end state, then determined the deliverable of the final project plan, as well as the operational relevance of the project. The primary purpose at this stage of the workshops was to provide a common operational picture on JPR, its future challenges and possible shortfalls and to achieve adequate solutions and final recommendations to improve the JPR capability. The problem statement for this project may be expressed as:

The global Joint Personnel Recovery (JPR) community, comprised of Allied & Partner Nations, multinational organizations for collective security and Diplomatic, Interagency and Civil JPR stakeholders, requires an assessment of Collective Capability, Capacity, Interoperability and Commitment (CCIC)4 to improve and ensure the effectiveness of the full JPR System now and in evolving operational environments over the next two decades.

The team, established with a common methodology/approach, including fact-finding research and inductive analysis, will be driven by the overall question of ‘What is required to ensure the global JPR System will be effective in 2040?’ The project will design and conduct a group of related studies that assess the current state of the global JPR system and propose how changes might impact coalition military, political/diplomatic and civil policies, doctrine and resource commitments to JPR. This process will help remedy significant knowledge gaps and inform the decision-making of Allies, Partner Nations and Multinational organizations, providing recommendations to prepare and conduct JPR operations over the next two decades. An analysis of the existing JPR/PR literature will be carried out (Lesson Identified/Lesson Learned from exercises, Case Studies on PR and JPR). Specific personalized questionnaires and interviews will be created and submitted to countries that want to voluntarily contribute to the study. New ‘Case Studies’ might be conducted in Colombia and Mali, along the Pacific Coast and in North-Eastern Europe to examine various threats, operational domains, challenges and trends. Wargaming will also be used to test and critically analyse various assessments, conclusions and recommendations. The JPR Project will incorporate observations from international JPR multilateral exercises. Finally, emerging threats, technological development, demographic and geopolitical trends will be analysed to determine possible impacts on the future capabilities of JPR. 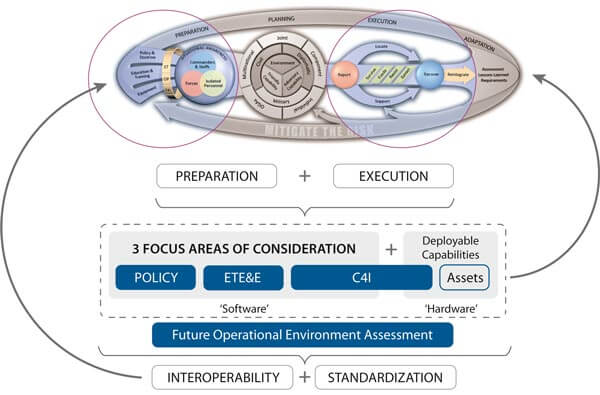 It was decided to use three combined focus areas by which capability and interoperability may be assessed:

Each of these capability areas will be addressed as a distinct research effort, or Line of Inquiry (LOI), led by a designated lead within the project team and framed within the context of a fourth LOI, the assessment of the FOE for JPR in (and leading up to) 2040.

The United Kingdom is leading the research team for the FOE LOI, joined by Canada, Australia, the Netherlands and the European Personnel Recovery Centre (EPRC).

Germany is leading the research and solution development team for Policy, Doctrine and Standardization and the C4I LOI, joined by Denmark, Sweden and Poland.

Italy is in the lead for the research and solution development team for the Education, Training, Exercise and Evaluation LOI, joined by Spain, Hungary, Romania and the EPRC.

Other project members (including NATO ACT, the JAPCC, the European Union/European Defense Agency, the European Personnel Recovery Center and JPRA) will participate on an ad hoc basis, contributing to and coordinating with each of the LOI teams.

Furthermore, this study will focus primarily on the Preparation and Execution Phases of the JPR System. Preparation is where decisions and resultant activities for all three of the combined assessment criteria are undertaken, and it is in the Execution Phase where the effectiveness of those decisions and activities may be evaluated (however, this does not mean that we will ignore issues we may find occurring in the Planning and Adaptation phases).

The graphic above illustrates the key elements of the methodology:

Two out of four planned project Working Sessions (WS) have been held to date, and substantial progress was made on both occasions. During the first WS, the team was able to assess and finalize research assignments for all LOIs. Most importantly it accomplished a primary workshop objective of confirming the project ‘roadmap’ activities and schedules, as well as cross levelling of the information by all LOI subgroups, and approving the way ahead for the teams. The second WS was the corroboration of the previous WS effort, and built off the initial research of the teams, while proposing various PR related scenarios that may be tested in future wargames, which will be conducted by the project teams.

The purpose of the wargames will be to define which capabilities will best ensure timely, effective coalition personnel recovery in each of these scenarios within the future operating environment. Put another way, it will determine which capabilities will best address the collective gaps and shortfalls identified during our research. The current LOI teams will be broken up into scenario-based teams each of which would develop a PR event and corresponding mission, driven by defined ‘research questions’ focused on the preparation and employment of select capabilities. The research questions or hypotheses may also be potential capability development recommendations which could be tested via the game.

The protection of the force is a basic military principle upon which the JPR concept is founded. Despite near-continuous cooperation among coalition partners across the full spectrum of JPR, there exists no current single study that prioritizes all of the JPR CCIC gaps and seams among coalition partners. The JPR 2040 project is most probably the first study involving representatives from across the global JPR community, which attempts to assess this lack of priorities, approaching the problem from different perspectives. This kind of approach aims to deliver recommendations with which nations and organizations can develop a number of interoperable capabilities.

The project should not be limited to military entities. The intent is to reach out to diplomatic (Departments of State, Foreign Ministries, United Nations), civil (Non-Governmental and Inter-Governmental Organizations), as well as potential commercial stakeholders. Anyone operating in a future environment is at risk of becoming an Isolated Person (ISOP).

The two remaining Project Working Sessions will be hosted by Spain in March 2020 and by the JAPCC in September 2020. The publication and distribution of the project are expected by the end of December 2020.

The willingness of the project team might be summarized in a quote by a classical Greek (Athenian) philosopher:

‘I cannot teach anybody anything, I can only make them think.’
Socrates

1. European Environment Agency, 2014 assessment of Global megatrends – an update: www.europe.eu
2. MCDC ‘Joint Personnel Recovery’ – a guidebook for improving Multi-National capability (Dec. 2018).
3. JAPCC White Paper ‘Personnel Recovery, That Others May Live to Return With Honour – A Primer’ (2011).
4. Capability is defined as the ability to perform a function; Capacity is defined as the amount of a given capability; Interoperability is the ability to perform a function effectively with one or more partners and Commitment is the willingness to employ capability at some capacity at a specified time.

Lieutenant Commander Tommaso Barone
joined the Italian Navy in 1997. He was trained by the US Navy and qualified as Naval Aviator in 2003. He participated in all major operations including ‘Active Endeavour’, ‘Leonte’, ‘Atalanta’ and ‘Isaf’. In 2010 he deployed on ITS CVH ‘Cavour’ for the Operation ‘White Crane’ in support of the population of Haiti. In 2015 he was stationed in Antarctica as Operational Director of the XXXI ‘Italian Antarctic Expedition’. He is an instructor pilot and he flew Helicopters such as SH3D and EH101 mostly in support of amphibious and special forces operations and JPR. He is currently serving as the Joint Personnel Recovery, Littoral and Special Operations Subject Matter Expert at the Joint Air Power Competence Centre.

The article displayed has been published as part of the JAPCC Journal Issue 29. You can download the full Journal by clicking the image below.