Unmanned Aerial Systems (UASs) are proliferating across the spectrum of military and civilian fields. NATO has recognized the importance of these systems, and is transforming to take advantage of them. Various NATO and non-NATO organizations are working the complex issues associated with UAS operations within the Alliance1. As the current levels of global market adoption show2, UASs can meet many of the most challenging requirements of both civilian and military operators. However, factors such as public acceptance, technological progress, cost, and operational requirements will probably impact the way the UAS market will evolve, and potentially lead to commanders employing UAS in missions that only manned platforms executed in the past. Leonardo Helicopter Division (LHD), part of Leonardo S.p.A, is a designer and manufacturer of helicopters (branded ‘Agusta Westland’) and Rotary Wing Unmanned Aerial Systems (RUASs). As the following paragraphs of this article will cover, LHD, which has been investing in Unmanned Aerial Systems since 2010, firmly believes that RUASs will play a fundamental role in a variety of maritime missions in the future. 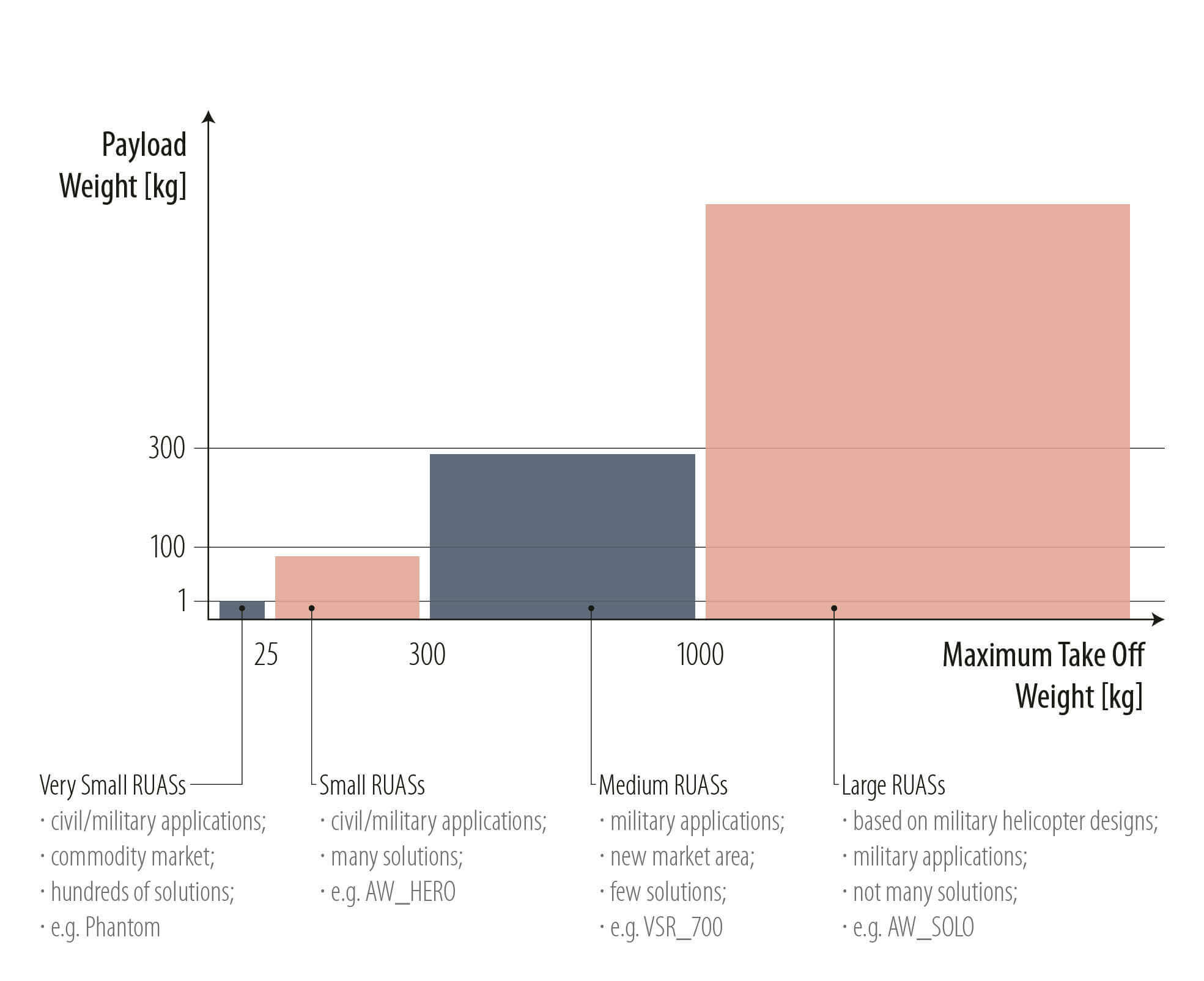 A Brief Introduction to the RUAS Market

The ‘Maximum Take-Off Weight’ (MTOW) and the ‘User Type’ are two useful indicators for analysing the RUAS market with a good level of granularity. In terms of weight, four MTOW classes embrace the whole RUAS market spectrum adequately as depicted in Figure 1 on page 65.

On the other hand, from a ‘User Type’ perspective, one can divide the RUAS market into three segments: military, dual-use operations, and civilian.

‘User type’ and ‘weight class’ combinations are synonyms of operations which can be rather different one from each other. While the operation peculiarity may not support RUAS design commonality across MTOW classes and segments, one concept appears to have general validity: regardless of the mission, future RUAS users will task engineers to find technical solutions capable of minimizing costs while guaranteeing interoperability and adequate performance compared to manned helicopters.

In terms of prospective trends in market demand, military, governmental, and civilian customers adopt ‘very small’ RUASs mostly for land requirements, while ‘medium’ and ‘large’ RUASs currently find limited requests. Comparatively, requests for ‘small’ RUASs to deploy for military and governmental naval applications, such as Intelligence, Surveillance, and Reconnaissance (ISR) missions and border control roles, are growing. In LHD’s view, while the use of ‘small’ RUASs might expand to the civilian segment as well, military and governmental customers could, in the medium term, evolve and deploy bigger RUASs on a wider scale for land and naval resupply missions, or for high-end naval warfare missions, e.g. Anti-Submarine Warfare (ASW)3.

Focusing on military and governmental customers, and analysing concepts of operation in terms of scenario intensity and mission complexity, LHD anticipates that manned helicopter operations will decrease in the long term. In particular, by 2035, the simpler the mission and the lower the scenario intensity – e.g. persistent ISR mission in law enforcement scenario – the higher the chances of UASs replacing manned assets completely. On the other hand, manned helicopters will increasingly work alongside RUASs exploiting Manned-Unmanned Teaming (MUM-T)4 capabilities the more complex the mission and the higher the warfare intensity level. MUM-T is indeed a growing capability area, and thanks to advances in autonomous technologies, one expects MUM-T to deliver important operational and cost advantages in all operational domains.

Shifting the focus to the maritime domain, the interest in Vertical Take-off and Landing (VTOL) UAS design is gaining momentum in shipborne applications. While fixed-wing UASs still find their way into naval operations, but normally operate from ashore in support of the Maritime Command, VTOL RUAS designs can easily embark on a ship and operate directly from there with minimal, logistical impact. The introduction of various RUAS types into service over the last years, and the recent EU tenders related to maritime security (e.g. OCEAN 2020 programme), reinforce the emerging trend of resorting to RUASs for ISR and similar missions among military and governmental entities. In this perspective, and according to industry forecasts, while ‘large’ RUASs are already in service but have limited market, the demand for ‘small’ RUASs is experiencing a sharp rise due to balanced compromises among costs, performance, interoperability, and simplicity of operation.

In military and governmental maritime applications, ‘small’ RUASs need to meet a specific set of high-level requirements, such as minimization of the logistical footprint on ships, 5+ hours flight endurance, heavy-fuel compatibility, integration of modular payloads featuring a variety of sensors (e.g. radar, thermal and optical cameras, lasers, sniffers), and capability to perform automatic ship take-offs and landings under severe sea state conditions. In addition, requirements also can include integration with the ship’s Combat Management System (CMS)5, safe data dissemination towards any asset, and cybersecurity.

Engineers should design state-of-the-art ‘small’ RUASs in accordance with the strictest requirements that modern missions – environmental monitoring, ISR, and combat support (CS), for instance – demand today. Employing a RUAS for such missions would increase capability and minimize crew risks without demanding additional resources. For instance, while a single shipborne helicopter can only provide time-limited mothership ISR persistence, due to recurring maintenance needs, the combination of the same helicopter with a RUAS can lead to 24/7 ISR persistence at the same or even reduced overall cost – which means a net gain in operational capability while respecting the operational financial budget allocation. In other roles, like CS, a RUAS can operate and achieve a commander’s desired effect without exposing operators and more costly assets to the potential consequences of an adversary’s reaction.

In the future, ‘small’ RUASs could further evolve to integrate new payloads, expanding their operational reach to missions like Communication Relays, Mine Countermeasure Operations or ASW6. In this context, ‘small’ RUASs could insert and monitor sonobuoys in ASW missions, or support minesweeping sorties by means of an Airborne Laser Mine Detecting System (ALMDS)7. While integrating new payloads is strategically important, MUM-T will likely be crucial to further ‘small’ RUAS developments as well. In particular, MUM-T will permit mission execution in a collaborative way, thus increasing the time which operators of manned helicopters can devote to other high-value activities crucial to mission success. In addition, thanks to better situational awareness, MUM-T also will create a reduction in risk for manned assets and operators. It is worth mentioning that LHD’s ‘small’ RUAS (AWHERO)8 already can operate at a Level of Integration 3 (LOI 3) when teamed with manned platforms. This level of integration, out of the 5 LOI foreseen by STANAG 4586 as reported in the next table, means that a helicopter can receive data from the RUAS’s payload and control the payload itself.

Table 1: UAV Level Of Integration table as per STANAG 4586.

As previously mentioned, ‘large’ RUASs already are in use in naval military applications. Current rates of adoption are still limited though, and further acquisitions for complex warfare missions (e.g. ASW) or for ship-shore resupply roles likely will happen at a later stage. ‘Large’ RUASs surely would reduce the workload on manned helicopters, but this benefit comes at higher costs, complexity, and larger logistical footprints compared to ‘small’ RUASs. Notwithstanding these barriers, OCEAN 2020 demos, in which LHD will operate both ‘small’ (AWHERO) and ‘large’ (SW-4 Solo)9 RUASs in various maritime missions, suggest that military and governmental users look at ‘large’ RUASs with a certain degree of interest. As prospective customers understand the benefits of shipborne UAS, it is reasonable that engineers will conceive modern ship designs tailored for RUAS operations. RUASs also could be deployed aboard ships already in service. While UAS integration is reasonably straightforward in retrofit, small ship hangars, possible lack of space for new antennas or control stations, and potential impacts to the ship’s Radar Cross Section (RCS) might pose the biggest barriers to RUAS adoption on older ships already in service.

Rotary Wing Unmanned Aerial Systems will play an increasing role in the naval domain, especially for military and governmental users. This could mean that RUASs will drive a more limited use of manned helicopters, with missions dictating if a manned helicopter is more practical or effective in that particular time or space than a RUAS. In 20 years’ time, the end user will likely operate mixed manned-unmanned helicopter fleets for the most critical missions in medium-high intensity warfare scenarios, while for routine missions in more stable environments operators will more and more resort to RUASs only. Expected technological developments in the MUM-T domain, for areas such as sensor capabilities and artificial intelligence, almost certainly will induce cost reductions without being detrimental to operational capabilities. In addition, RUASs will mitigate both the risks and the workload of those who operate manned helicopters. ‘Large’ RUASs are already in service, but their use is currently limited only to major NATO navies. Conversely, the concept of ‘small’ RUASs for naval operations is gaining wider acceptance among the military and governmental communities. International demonstrations in the field of maritime security, such as the EU’s OCEAN 2020 initiative, will help solidify RUAS acceptance through live testing of ISR, ship interdiction, and data dissemination profiles. The limited logistical footprint combined with capable sensors will allow ‘small’ RUASs to increase ship capabilities even on platforms with a small flight deck. In the near future, larger RUASs might gain wider market acceptance for complex missions such as Anti-Surface Warfare (ASUW) and resupply, but they will always operate from larger ships.

Lorenzo Fiori
is a mechanical and electronics engineer. He has worked in aerospace for more than 30 years for several companies, covering operational posts ranging from Engineering, QA, Marketing & Sales, Programme Management, and Operations. In 2007 he joined Finmeccanica (now Leonardo) with several appointments, starting as Chief of the Technical Office and later as Senior Vice President of Strategy. He also participated as a board member to some of the subsidiaries. Since July 2016 he is responsible for Strategy and New Initiatives within Leonardo’s Helicopter Division.

The article displayed has been published as part of the JAPCC Journal Issue 27. You can download the full Journal by clicking the image below.