NATO, as a technologically advanced Alliance, relies significantly on space-based services. NATO does not own or operate Space systems. Space systems will remain under national control for the foreseeable future. This necessitates a coordinating function to ensure Space support is continual for Alliance military operations. This role is provided by the Space Support Coordination1 (SpSC) function and is organized into SpSC Elements (SpSCE), which are located in some NATO commands. In 2018 the Policy on Space support in NATO operations2 was signed and provided NATO, for the first time, with a basic document for the organization of Space support. This was followed by an overarching Space policy released in June 2019.3 The SpSC function plays a critical role in operations. While Intelligence, Surveillance and Reconnaissance (ISR) as well as Satellite Communications (SATCOM) are usually organized within their respective intelligence and communications channels, the SpSC resides in the current-operations division and covers all other space support concerns. It is possible that military personnel may think of space and approach the SpSC for assistance when it is an Intel or SATCOM problem. In this situation, it is necessary for the SpSC personnel to know the points of contact within intelligence and/or communications, to ensure that support requests are processed appropriately. The important question in situations like this for Joint Commanders is, where and how to obtain Space support to meet their needs.

Space support is provided either by national assets of NATO member nations or via commercial services organized and distributed via NATO agencies.4

The role of SpSCE is defined in chapter five in the Allied Joint Publication 3.3 (AJP 3.3).5 The AJP still requires more strategic guidance and currently speaks only to minor space-related subjects while other strategic documents are under development or still missing. To achieve the level of guidance that currently exists in major domains like Air, Land, Sea and Cyber, Space will require advocacy at the highest levels within NATO.

The challenge facing the certification and approval of written guidance within the Space domain is exacerbated by the limited number of Space specialist positions filled by trained personnel. In preparation for a NATO operation there is a requirement within the force generation process for all Space personnel requested to be in place. The limited number of trained Space personnel, both in NATO and within national organizations makes it complicated to fill the requested positions. The same problem affects the staffing of exercises.

The SpSC function at the strategic level is located within Allied Command Operations (ACO) at Supreme Headquarters Allied Powers Europe (SHAPE). Their work includes the development of a peacetime Memorandum of Understanding (MoU), standardization and doctrinal work, as well as having the function of requesting authority in NATO operations (Figure 1). ACO coordinates with National Space capability providers to fulfil requests from subordinate commands. At the operational level, the SpSCE’s are located within the Joint Force Command (JFC) and/or the component command headquarter (HQ) levels. At the Tactical level, SpSCE can be created on an ad hoc basis depending on the nature of the operation. Tactical level refers to NATO assigned Corps level (land forces) like the 1 German/Netherlands Corps (1GNC) or comparable units in the air and naval forces. 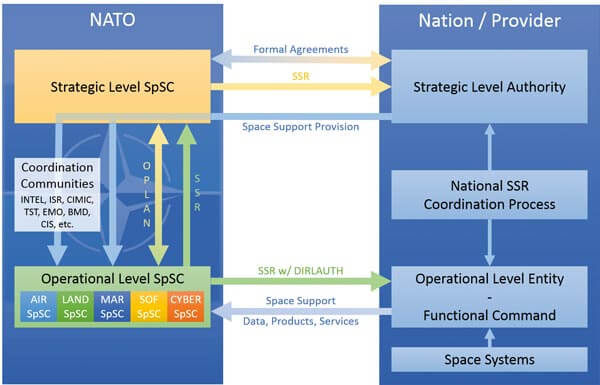 The SpSCE’s tool to request Space support is via the Space Support Request (SSR) Form, which is a standardized request form and procedure. The request is then transmitted to the strategic level SpSC (ACO) and, if approved, afterwards to the nations or providers. To reduce the requesting time, or for special purposes, it is possible to establish a Direct Liaison Authority (DIRLAUTH) that allows the operational level to directly coordinate with national Space capability providers.

Nevertheless, national Space capability from a specific country to support their national forces, sent under NATO control, is usually provided directly to them. Depending on the nation, this could be a valid support to the NATO operation however, quite frequently, there are classification issues to solve. This is especially so when there are no existing bilateral Space-capability related data-sharing agreements signed between the acting NATO member nations.

The SpSC at ACO is permanently staffed with only one Subject Matter Expert (SME), and as such cannot operate around the clock. This can be difficult since it is the approval and requesting authority for SSRs to the NATO member nations. On the operational level the SpSCE at the JFC is permanently staffed with a core element (one or two SMEs) and has to be augmented by up to eight SMEs for an operation. On the component command level there is also a permanently staffed core element of one or two SMEs that will be augmented by up to eight SMEs, depending on the nature and intensity of an operation. The Commander Allied Air Command (AIRCOM) plays a particularly important role as the Air and Space advisor to the Supreme Allied Commander Europe (SACEUR). On the tactical level there are no permanent SpSCE personnel.

The experience taken out of Exercise Trident Juncture 18 (TRJE18) showed that even on the tactical level an organic SpSCE, staffed at least with one Space SME6 in peacetime is essential. The role of this person is not only to be the Space advisor and planner for the leadership, but also to train and educate the HQ concerning the options and limitations of Space support.

Currently, United States (US) personnel are responsible for the majority of staffing of Space relevant positions within the NATO Command Structure (NCS). Other space-faring nations have personnel in the NCS, but mainly in national positions due to limited numbers.

The NATO School in Oberammergau (NSO) offers one Space-related course and is currently developing a second course7. The current course is ‘Introduction to Space in NATO’, which targets Space personnel as well as personnel working with services relying on Space capabilities. The second course will be an advanced course, designed as a continuation from the first and aims to generate more personnel educated to work in a SpSCE. This designated Space Support Coordinator Course is currently scheduled for validation in 2020. There are also several national Space courses that are open to NATO nations, which are distributed within the Discipline Alignment Plan (DAP) for ‘Space Support in Operations’.8

NATO included Space into major exercises via the Capability Development Circle. The Trident Exercise series9 has to be mentioned in particular as, according to the NATO structure, the SpSCE are staffed exclusively for the exercise. Based on the exercise requirements it could take a long time to have all positions filled. It is common to educate the personnel from national assignments on NATO specific procedures during exercises, especially the NATO SSR procedure.

Another issue challenging the SpSCEs is the lack of adversary Space capability and capacity knowledge in the intelligence branches. It is not usually possible for the intelligence branch to respond to these Commander’s information requirements and the intelligence-related questions are regularly transferred to the SpSCE personnel who have a better overview on the topic. During TRJE18 SpSCE took over the Space-intel task permanently because of the major impact on operational planning by the Opposing Force (OPFOR) counter-space actions. Nevertheless, in line with the raised importance of Space and the improvement in the SpSC process, intelligence personnel have to be trained and/or special Space-intel positions have to be established.

Assessments and Findings from TRJE18

A TRJE18 lesson learned for 1GNC was, that it is better to have Space-related personnel embedded within their peacetime structure. For TRJE18 a SpSCE was assigned to the corps HQ to fulfil the Space capability assessment and provide guidance, which included a significant number of briefings and small training exercises. This was necessary because in the ‘regular’ training and operations cycle of the corps, there was no designated Space support assigned. In the role of Allied Land Command (LANDCOM), in which 1GNC acted in the exercise, it had the coordination role for the first time. In the future, a permanently staffed core element (one SME) should always be available to include Space support in every activity. This will create a greater appreciation and understanding of the Space domain for the leadership and HQ personnel.

Depending on the availability of Space-related personnel within the NCS, they might also be available to train SpSCE that are on call to be assigned to supportable units. The US Army has established SpSCE type function from Division to Army level consisting of four to six personnel located in the operations and planning branches that are augmented when needed.10 They support various exercises and operations. These teams might not be available for NATO, but it would also be possible to have them in national bases and allocated to NATO via the force generation process. Realizing this for NATO will be an improvement to the current situation, because the number of Space SMEs will be further increased in the NCS. On the other hand the daily contact between the SpSCE and the rest of the HQ would be still pending.

The increasing complexity of requesting appropriate Space capability support should trigger the need for a stand-alone AJP for Space operations. The process of developing such an AJP will potentially take years and should be initiated as soon as possible. This might provide a refined ability for NATO to react on future Space-related decisions (like recognizing Space as an operational domain).

Based on the lessons learned during the last major NATO exercises, the overall Space organization within the NCS has to be reviewed and extended. Specific attention should be afforded to the SpSC role it requires and additional trained personnel. This education and training could be done either by national or NATO courses. It must be noted that it is more important to ensure positions are filled with trained personnel, than to balance the ratio of nations to the positions.

Space personal, trained through national courses, have also to be familiar with the NATO requirements and procedures. This could be done via courses at the NSO or by participating in a major NATO exercise. Additionally, it would be very helpful if more national Space-related courses could be made available for NATO personnel. From a training perspective, Space support should be included in every NATO exercise and should be a concerted effort of NATO to encourage as many nations as possible to train and educate Space-related personnel. This will highlight the Alliance’s forward-leaning approach to collective defence.

Lieutenant Colonel Dipl.-Ing. Tim Vasen
began his military career in July 1994 as a conscript. After his officer training he served for several years in commanding and staff positions within the artillery branch, including a deployment to KFOR as company commander of the DEU ISTAR-company. After 2005, he took over positions as an intelligence officer, responsible for IMINT planning and technical assessments, including positions in the office of military studies as a senior analyst for Space systems. From 2013 to 2017 he was part of the German Space Situational Awareness Centre (GSSAC) responsible for Space intelligence. Since October 2017 he serves as a Space SME at the JAPCC, e.g. responsible as OPFOR Space planner in TRJN17, TRJE18 and TRJU19.

The article displayed has been published as part of the JAPCC Journal Issue 29. You can download the full Journal by clicking the image below.