Lieutenant Colonel Ed Wijninga (RNLAF) is currently serving in the Education, Training, Exercises and Lessons Learned Section. He has supported the Steadfast and Trident NATO CPX exercises as Chief OPFOR Air for the past six years.

In 2013, JAPCC provided extensive support to the Joint Warfare Centre (JWC) in Stavanger for the first time with an OPFOR Air team. The supported exercise was Steadfast Jazz 13 and, for the first time, based on a complex and comprehensive Article 5 scenario. In the years leading up to Steadfast Jazz 13, NATO had focused many of its exercises on out-of-area operations and counter-insurgency scenarios. This meant that there was only limited ‘air play’ as these exercises featured virtually no opposition air forces. An interesting aspect of Steadfast Jazz 13 was that the scenario introduced the use of proxy forces and hybrid operations.

The JAPCC team in 2013 also encompassed one Space Subject Matter Expert (SME) who supported the scenario and scripted several Space injects that were executed during the exercise. This took the Training Audience (TA) more or less by surprise, who were not well prepared to deal with Space-induced incidents and were not adequately staffed to deal with challenges like the effects of Space weather or GPS jamming. As of 2015, the JAPCC team has also provided a Cyber SME to the JWC-led exercises, which again for the first time, challenged the TA. Last but not least, the JAPCC proposed introducing the Training Audience to the challenge of Advanced-Layered Defence Systems, better known as Anti-Access Area Denial (A2AD).

The three areas of Cyber, Space and A2AD have been further developed and included in subsequent exercise scenarios. Their positive impact on the Training Audiences resulted in a request from JWC for JAPCC to lead development, not only for OPFOR Air scenarios for Exercise Trident Juncture 18, but also for the Space and Cyber scenarios. Russia’s illegal annexation of Crimea has provided further momentum for NATO to exercise and develop scenarios with all aspects of modern warfare in mind. These exercise scenarios now provide the Training Audience with comprehensive Multi-Domain challenges.

After decades of counter-insurgency operations against opponents who possessed limited means and certainly no credible standing forces, in 2014 the world was taken by surprise when it was confronted with hybrid operations on the Crimea. At first, these operations were rather covert but later were openly supported by Russian forces, who occupied and illegally annexed this southern Ukrainian peninsula. A few months later then the story repeated itself in the Donbass region in Eastern Ukraine when hybrid forces started operations, again covertly supported by Russia. This hybrid activity culminated with a SA-17 missile launch that resulted in the crash of Flight MH-17. The Joint Investigation Team (JIT) later found clear evidence that although proxy forces operated the SA-17 system, Russia had provided it. The JIT was even able to provide evidence specifying from which Russian Air Defence Brigade the system originated.

At the same time, the World was increasingly confronted with villainous Cyber activity, in many cases originating from Russia, China or North Korea. In keeping with the classification of this article, one can safely assume that the world will continue to face Cyber challenges on a daily basis. Some hackers try to disrupt processes, disturbing public services such as transport, some try to obtain military information, and some try to gain access to economic information to strengthen their economic position.

Space has also become a factor at play in adversarial tactics with the proliferation of anti-satellite weapons, anti-satellite jammers, Directed Energy Weapons, dazzlers and espionage satellites. Employment of these could disrupt or destroy NATO’s capability to gather information, apply Command & Control and conduct operations.

Scenario development for Trident Juncture 18 (TRJE18) encompassed a comprehensive set of forces to include a robust OPFOR Space Order of Battle (ORBAT) and Cyber capabilities. As a result, the TRJE18 scenario could be seen as a Multi-Domain scenario providing exercise play that not only included A2AD in its most comprehensive form, but also challenged the TA with realistic in-Space and Cyber incidents. The TA was prepared for this and had invested in manning, knowledge and capabilities to deal with the challenges presented to them. Despite this, the TA still struggled with the vast scale of the scenario across all acknowledged domains and Space at the same time. One of the greatest challenges for the Joint Commands and their staffs was building a comprehensive and shared Multi-Domain picture using outdated C2 systems, and accounting for activities and effects originating outside as well as inside the Joint Operations Area (JOA). These complex scenarios require a completely new approach to conducting operations and creating the desired effects in the locations where these effects are most successful.

In past exercises, no TA was able to successfully deal with A2AD challenges. The added complication of Space and Cyber operations has presented them with even greater challenges. There is still an ongoing school of thought that A2AD is an Air Component’s (ACC) problem to be solved primarily by the ACC. In reality, the A2AD puzzle can only be solved by synchronised, coordinated joint (and most probably Multi-Domain) approach. The Joint Force Commander and his staff play a key role here. Gone are the days when one can only think in terms of supported/supporting relationships, gone are the days of me first, you later. The best approach is to think in effects on how to address the problem and where and when to create these effects. All the components, including Space and Cyber, have a role to play in this approach and, most probably, all at the same time.

The Air Component can degrade the opponent’s Integrated Air Defence System, protect air/sea ports of em- and debarkation, can protect its air bases against long-range strike and can provide force protection. Space can try to degrade the opponent’s precision navigation and timing and intelligence, surveillance and reconnaissance (ISR) systems and can force the opponent to use other systems over which they have no direct control. special operations forces (SOF) can contribute by conducting deep reconnaissance missions and counter- hybrid operations. The land component can provide joint fires, (counter-)mobility operations and ensure freedom of movement of main supply routes. Cyber can contribute with offensive cyber operations to degrade opponent’s command & control and other systems and the maritime component can contribute with anti-submarine warfare, anti-surface warfare, mine-clearing operations and joint fires as well. Strategic communications can be utilised to gain support for NATO operations while at the same time trying to influence the opponent’s population. All at the same time and fully coordinated and synchronised. I would like to call that simultaneous Multi-Domain (SMD) operations.

The SMD approach is moving away from operations which are synchronised as well but more so in a sequential order. This simultaneous approach requires a different mindset. It also requires that NATO obtain better access than it currently has to Space and Cyber capabilities. Both Space and Cyber assets are only provided by individual NATO nations upon request. Offensive Cyber is even more sensitive in the sense that very few NATO nations now have offensive Cyber capabilities that they are willing to provide for NATO operations. If NATO were able to use offensive Cyber and Space capabilities, there would also be legal aspects to consider; a topic which is addressed elsewhere in this read ahead by Lieutenant Colonel MacKenzie. NATO, therefore, has to rely heavily on capabilities that it does not own, which can be a limiting factor in the planning and conduct of Multi-Domain Operations. Whichever capabilities are used to address the problems in Multi-Domain Operations, a simultaneous approach might be worth considering and this is a marked difference from the sequential order of operations with which NATO is most familiar.

The Supreme Allied Commander Europe (SACEUR) has made it clear in his Annual Guidance for Training and Exercises for 2019 (SAGE19) that high-intensity, near peer-to-peer, Multi-Domain scenarios as should be the main training and exercise objectives for the coming years. He even goes as far as making them a priority by accepting some risk for other areas. This means that future exercise should focus on highly complex and comprehensive Multi-Domain scenarios, thus demanding more of the Training Audiences. The combination of SACEUR’s Guidance and SMD should lead to a rethink by Joint- and Component staffs on how they might need to interact with each other. At the same time, NATO might also need to look at whether their current construct of exercises provides the necessary training in terms of planning and staff processes to address Multi-Domain Operations. The conduct of exercises in recent years have focused on sequential operations and would suggest that the current training does not address the problems identified.

One other consideration that is not frequently exercised is the civilian domain. This could be a whole domain by itself. The reader might argue that this aspect is fully covered in NATO’s current comprehensive approach to operations but several facets are not covered in this perspective on warfare. A comparison with the Cold War can be made for the deployment of NATO’s forces; individual nations would use their resources, state-owned companies, requisitioned transport means and NATO would have planned the synchronisation and coordination of movements. This was particularly important as several Corps-size army formations moved through Europe at the same time crossing each other’s paths to deploy to field locations. When NATO troops need to deploy to a Joint Operations Area in an Article 5 scenario in current times, the requirements for transport and sustainment might be even greater. However, NATO nations, to a large extent, do not own these capabilities anymore. State-owned railways, transport resources, telecommunications providers, and sustainment facilities have been privatised, and governments need to negotiate their availability for military operations without disrupting the economy too much. This is an entirely new aspect of warfare that is rarely exercised but might be a completely new domain to be considered. The dependency on external resources, in particular, might prove to be an enormous vulnerability for the deployment of forces and the conduct of operations.

Exercises traditionally consist of several phases in which the TA is preparing and executing the scenario. One of the most critical phases is the battle staff training (BST) where the Joint Staff conducts force integration training at the staff level and prepares for the execution phase. One option might be to directly connect the BST to the execution in a sense that during the BST plans are developed and subsequently executed before the execution phase in a simulated environment so that the results are available at Startex. This would provide valuable feedback to the Training Audience about the validity and feasibility of their original plan. Another option would be to organise specific table-top exercises for General Officers in which they are subjected to a Multi-Domain scenario. A final suggestion would be to re-introduce Command Post exercises like those conducted during the Cold War which involved Operational Joint staffs, Strategic Commands and National Headquarters, including politicians. Scholars of the time know these as the WINTEX/CIMEX exercises. These scenarios could be used to address the full complex environment of Multi-Domain Operations and could start the thinking processes required to deal with the kind of threats and challenges we are confronted with today. 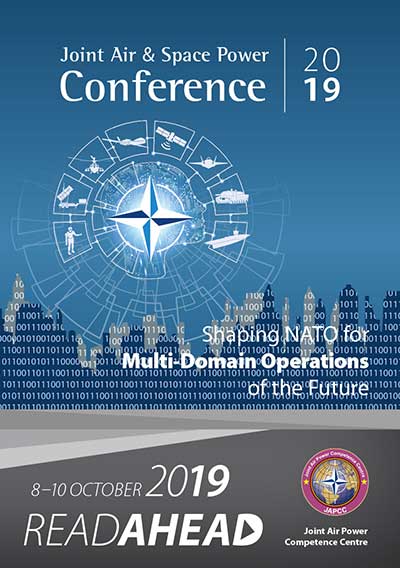