Defining the ‘Domain’ in Multi-Domain

Courtesy of Over the Horizon – Multi-Domain Operations & Strategy

Multi-Domain’ is the word du jour of the defence enterprise. While there are plenty of philosophical discussions on the future of warfare, the important dialogue regarding the definition of domains have been largely untouched. There are a lot of smart people trying to wrap their heads around what this means for the employment of forces, but much of this churn is currently wasted, as the defence community does not have a basic definition for the word ‘domain.’ Until we understand what constitutes a domain, and just as importantly what does NOT, we cannot move forward with the paradigm shift that is Multi-Domain.

Doctrine does not help us with the definition of a domain. Joint Publication 3-0 does not define the term, though it uses the word from time to time. The closest it gets is in describing the Operating Environment (OE). Conceptually this is similar, but the notion of an operating environment is not the same as a domain. By the JP 3-0 definition, an OE can encompass some or all domains depending on where the commander needs to operate. This is much closer to the Multi-Domain concept as a whole where the commander will utilize a variety of domains to achieve their operational and strategic goals.

JP 5-0 offers the diagram on the next page as an example of the OE, comprised of the stated domains: Land, Air, Maritime, Space, and Cyberspace. This graphic is an attempt to visually depict the interrelationships of domains, however it still does not inform the actual definition of the term.

The US Army’s Training and Doctrine Center (TRADOC) also dances around the term with respect to Multi-Domain battle by stating: ‘all domains are contested – land, air, maritime, space and cyberspace, and across the electromagnetic spectrum.’ 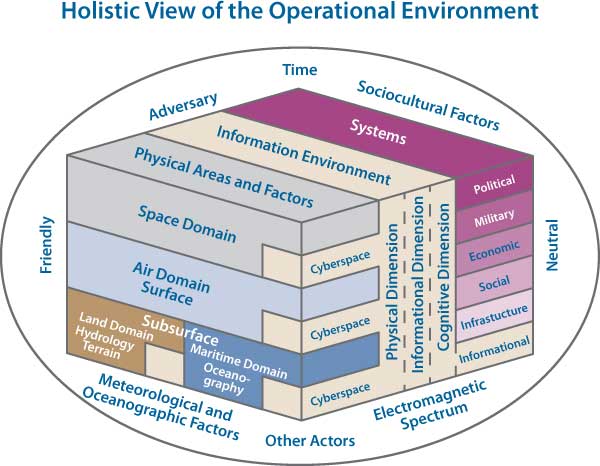 The physical domains of land, air, maritime, and space are generally well understood conceptually – to the extent that joint doctrine does not feel the need to define them, but the non-physical areas of cyberspace, information environment, and the electromagnetic spectrum are much more difficult to conceptualize and bound within a constructive definition. That often leads us to situations where operations in these non-physical domains are ill-defined, ineffectual, or non-existent, opening critical vulnerabilities to adversaries. As an example, electromagnetic interference (EMI) is rapidly becoming the Achilles heel of military operations. Manoeuvre within the electromagnetic spectrum is required by most warfighters, from basic radio operators to electronic warfare assets to satellite sensors. The sheer number of electronic devices on the battlefield, which travel through an ill-defined and coordinated EMS, are leading to routine blue-on-blue EMI fratricide. This could only be compounded if our opponents actively attempt to deny access.

This discussion is even more challenging when working with the North Atlantic Treaty Organization (NATO) partners because NATO doctrine uses the term domain to mean something else entirely. The NATO Combined Operations Planning Directive (COPD) uses the term domain in reference to the Political, Military, Economic, Social, Infrastructure, and Information Systems (PMESII), which the JP 5-0 refers to as systems. NATO doctrine looks at the concept of domains as dimensions of an operation environment ‘ … including its land, air/space, maritime dimensions, as well as the PMESII systems of main adversaries … ’ (COPD 4-7). Therefore, with no doctrinal definition of a domain, we are forced to look to other thinkers for insight.

William Dries in a War on the Rocks commentary used the Miriam Webster definition for domain: ‘a region distinctively marked by some physical or virtual feature(s).’ This is a good foundation for the term, but is more refined by Peter Garretson: ‘A domain is a space in which forces can manoeuvre to create effects.’ This definition is closer, but we would argue that it still misses some salient points.

Other researchers working in the field of information operations, Patrick D. Allen and Dennis P. Gilbert, have suggested a definition for domain as ‘The sphere of influence in which activities, functions, and operations are undertaken to accomplish missions and exercise control over an opponent in order to achieve desired effects’ (Allen and Gilbert, 133). The latter part of this definition addresses the relation of the domain to the operational requirements. This is an important distinction to make because the purpose for the existence of the domain concept is to provide a framework for focusing action in pursuit of strategic aims, however this definition does not fully encapsulate what we believe to be the full scope of a domain.

We offer the following definition of a domain, first proposed by Jeffrey Reilly, as a ‘Critical macro manoeuvre space whose access or control is vital to the freedom of action and superiority required by the mission.’

The first segment of this definition is a ‘critical macro manoeuvre space.’ This phrase begins by implying that a domain starts with manoeuvre. As one of the Joint Functions, movement and manoeuvre is … disposition of joint forces to conduct operations by securing positional advantages before or during execution. This function includes moving or deploying forces into an operational area and manoeuvring them within the timeline and to the operational depth necessary to achieve objectives. JP 1-0, I-19

The manoeuvre in a domain is often a unique, defining feature that separates domains from one another. But manoeuvre alone is not sufficient for a domain. The term macro helps simplify the definition by imposing some level of constraint. Without macro, one could argue that any distinctive feature would constitute a new domain, such as the difference in manoeuvre at 1k feet versus 50k feet, or the difference in manoeuvre in the infrared (IR) spectrum versus the radio frequency (RF) spectrum. This is the most difficult part of the definition, but one which must be clearly understood in order to be effective. The tension is simplicity versus specificity, and there are compromises with each.

The next segment is ‘whose access or control is vital.’ This segment implies that we need access or control of a medium in order for it to be a domain. For example, prior to the launch of Sputnik in 1957, the space domain physically existed, but was not operationally accessible. If the ability to manoeuvre through, access, or control, a medium is vital to the mission, then it meets the definition of a domain.

The final segment of the definition is ‘freedom of action and superiority required by the mission.’ This segment refers to the mission, and the ability to freely act and gain superiority in a domain. This closely ties to the definition of a centre of gravity in JP 5-0: ‘The source of power that provides moral or physical strength, freedom of action, or will to act.’ Superiority may come in the form of dominance, such as air superiority, or denial, such as in the electromagnetic spectrum. Ultimately, this ties the definition back to the mission, providing an anchor to the true purpose of manoeuvre through domains.

In the end, terms matter. The military is actively pursuing a Multi-Domain concept, with no understanding of the term domain. This attempt to provide a foundational definition is the beginning of that conversation. Until we understand the building blocks on which we are depending, the Multi-Domain concept cannot be explored to the level it deserves.

Dr. Jared Donnelly is an Assistant Professor at the Air Command and Staff College. He teaches in the Multi-Domain Operations Strategists program for the Department of Future Security Studies.

Lieutenant Commander Jon ‘Tike’ Farley is an instructor at the Air Command and Staff College who teaches in the Multi-Domain Operational Strategist program. He is an F-18 Pilot with multiple deployments to the 5th Fleet AOR, supporting operations in Iraq and Afghanistan.

Information provided is current as of June 2019

Other Essays in this Read Ahead

What is a Multi-Domain Operation?

The Complexity of Multi-Domain Operations

Is Fluidity the Key to Effective Multi-Domain Operations?

Sharing Cyber Capabilities within the Alliance

Interoperability Through Structured Pre-Authorization Cyber
Sharing cyber weapon/cyber capabilities requires trust between the member states, becoming a high-end policy decision due to the concerns of proliferation and the investment in designing a cyber-weapon that has a limited ’shelf-life’. The digital [...]

The Multi-Domain Combat Cloud in Light of Future Air Operations

An Enabler for Multi-Domain Operations
Much has been published on new operational concepts to re-enhance Western air superiority when facing threats posed by peer or near-peer competitors with long-range and precise fires. Most experts advocate for a much more integrated [...]

A Threat to NATO Missions
The rapid progress in computer vision made possible by deep learning techniques has favoured the large diffusion of appli­cations based on Artificial Intelligence (AI). The ability to analyse different kinds of images and data from [...]

Terabytes of Unprocessed Data or Superior Pieces of Info

Turning Airborne ISR into Multi-Domain Operations
The info-operational environment in which we are immersed is characterized by conflicts that span the entire spectrum of the competition continuum, including all possible combinations of conventional, asymmetric and hybrid operations. Our military organizations have [...]

Deterrence in the Space Domain

Increasing Deterrence in Space by Gaining a Mindset for Agile Space Operations
At Brussel’s NATO Summit in 2020, NATO Secretary General Jens Stoltenberg launched the #NATO 2030 effort remarking that ­‘resilience – be it infrastructure, telecommunications, 5G or healthcare, access to protective equipment – all of that [...]

Please leave us a message