In the world of electronic warfare (EW), the North Atlantic Treaty Organization (NATO) seems to be doing a good job of preparing to meet our adversaries on the battlefield tomorrow. The problem is that we are not prepared to fight them today. Indeed, there are many ongoing efforts to develop new technologies that will protect our ability to operate in a denied spectrum environment; a conflict in which our access to the spectrum is limited or blocked, thus interfering with our spectrum-dependent capabilities including position, navigation, targeting and communications.

The spectrum, or the electromagnetic spectrum, is the medium through which all radio, radar, cellular, wireless data, laser, and visual signals pass, therefore, it is where Electronic Warfare (EW) operates. The spectrum is categorized by frequencies and wavelengths used by each device to transmit and/or receive signals in the form of radiated energy. It is what enables radar acquisition and tracking, communications for command and control, navigation and precision timing, targeting and precision strike, and supports critical cyber activities.

The issue is that those new technologies will not be available for years to come. Compounding the problem is that many people are reluctant to accept that we do not own the spectrum in today’s battles like we owned the air as we hit Normandy on D-Day. To better protect our forces, our missions, and our interests, we must understand and accept what risks we have; only then can we determine how to operate today so that we can survive until our new technologies are deployed tomorrow.

The extent to which our military capabilities are networked is impressive, from high tech command centres to systems embedded in soldiers’ clothing. However, since these systems are 100% dependent upon the spectrum to send and receive data, they will fail in a denied spectrum environment from three major causes: adversary actions, environmental interference, and human error, as described briefly below.

Adversary Actions. In 2008, Russian forces conducted a full-spectrum offensive that denied the use of radio waves and the Internet within the country of Georgia. As a result, the Georgian military was effectively blinded, drastically reducing their command and control capacity.1 Similar approaches were used by Russian forces in Eastern Ukraine, where, according to a BBC article, ‘electronic jamming by specialized Russian units has been highly effective. Indeed, Russia has won the battle in the electromagnetic spectrum hands down.’2

In 2018 China has shot down one of their own satellites. This was the second such action following the initial shot down in 2010 when they likely used a DN-3 missile that reached 62 miles above the earth’s surface. These demonstrations did more than raise the eyebrows of many in the west.3 Though the satellites were their own and were apparently defunct, the message was clear: we can take down yours too.

Then consider the Islamic Revolutionary Guard Corp’s apparent ability to intercept control of a US, $6 million RQ-170 stealth drone and land it safely 140 miles inside Iran.4 This was the same drone system that enabled the US to watch the raid on Osama Bin Laden without detection.

Environmental Interference. Everyday, natural climactic conditions can interfere with EW operations. A common example was explained by a former USAF C-141 Starlifter navigator, who said that ‘the atmosphere is not constant; it changes its altitudes and even its shape. During our many Atlantic crossings, these atmospheric changes would increase or decrease the range of our HF signals, at times completely eliminating our ability to communicate with base.’ Adding to this is the effect solar flares have on the Earth’s ionosphere, causing it to become super-ionized which can also interfere with radio transmissions5 Then again, even a simple snowstorm can interrupt signal reception; just ask anyone who has dish instead of cable TV and lives where it is cold enough.

On the man-made side, the World Meteorological Organization (WMO) warned that ‘The race to release 5G technology threatens to squeeze out other radio-frequency dependent technologies.’ The concern is that its transmissions are expected to bleed over to bands used by the world’s critical national severe weather early warning systems.6 Another human-caused environmental event occurred last year when Global Positioning System (GPS) signals were interrupted around Ben Gurion International Airport in Tel Aviv, Israel. The cause appears to have been Russia’s attempts to protect operations at Hmeimim Airbase in Syria through the use of their EW systems. The effect, though not apparently directed at Israel, spread far enough to reach Ben Gurion some 200 miles to the south.7,,8

Human Error. From 2001 to the end of 2014, we lost 1,401 NATO/ISAF coalition personnel to Improvised Explosive Detonations (IED) in Afghanistan.9 To counter the new threat, the Counter Radio-Controlled Improvised Explosive Device (RCIED) electronic warfare system or ‘CREW’ was devised. It worked. However, in the rush to protect our soldiers, we ended up fielding a system that emitted jamming signals that included our communications frequencies. Therefore, when CREW was on, comms were out. In some cases, when needing to use the radio, soldiers would turn the system off… and we lost more soldiers. In another case, a 2,000 pound bomb was tragically directed by our own GPS systems to land on three US Special Forces north of Kandahar. The cause? During the bombing run, the ground controller who called for the air strike changed the battery in his GPS device, not realizing that rebooting it caused the aim point being transmitted to the B-52 bomber to be his.10

Denial of Spectrum Denial. In spite of the facts presented above, some people still deny that our forces are likely to be denied unfettered access to the spectrum in the field of battle. In other words, denial of spectrum denial or DoSD; they just won’t believe it will happen. A 2016 article in The Diplomat exemplified this point when it stated that ‘The United States has been criticized for ignoring the rapid development of Russia’s SIGINT and EW capability, which was put on full display at the onset of the Russian invasion into Crimea and east Ukraine, as Ukrainian cell-phones and communications equipment fell silent to Russian jammers.’11 If we now accept that we are likely to find ourselves in a spectrum-denied environment, what alternative solutions can we turn to? What follows is only a portion of many options, both old and new.

Tactics, Techniques and Procedures in a Spectrum-Denied Environment

Celestial Navigation. When the Apollo 12 rocket was struck by lightning after launch in 1969, the astronauts turned to celestial navigation; using the stars to get to the moon. This ancient system of navigation was shelved two decades ago but, as of 2015, the Naval Academy dusted off their sextants and have returned to teaching the skill.12 Let’s face it, you can’t hack a sextant but, then again, there are often clouds or fog ‘…’.

Omni-Directional Range/Distance Measurements Equipment. Very High Frequency (VHF) Omni-Directional Range (VOR) navigation systems are a commonly used navigation system based on fixed ground radio beacons. Through the use of radial and distance measurements to each beacon, the VOR/DME system enables a pilot to fly straight course between almost any two points.14 Granted, many are being phased out, but military use continues.

Radio Direction Finder. The radio direction finder has been around for a long time. By using two signals, such as two commercial radio stations, a vessel at sea can triangulate to pinpoint its own location. With search and rescue, a simple RDF device can pinpoint the location of a distress signal triggered by a man overboard, a wounded soldier on land, or a downed aircraft.

Star Tracker. Draper Laboratories has developed another approach to the GPS-denied solution; the ‘Cross Polarizing Star Tracker’. The system uses polarized sensors (rather than imaging optics) in a solution that does not require ‘power-hungry pixelated imaging sensors’ and can be fabricated on a ‘thin substrate, enabling vertical profiles of less than a millimeter,’ eliminating the need for bulky, mechanically complex optics.15

Inertial Navigation. Inertial Navigation Systems (INS) are not dependent upon any external information and do not radiate any energy externally. Instead, INS bases its capabilities on some initial reference point and the use of several gyros and accelerometers to derive subsequent positions. However, without external input, INS is subject to drift over time.

Dead Reckoning. Dead reckoning, the traditional method of navigation using a known starting point, a compass course, travel speed and time elapsed, is too oft ignored. However, the US Coast Guard included it in their 2020 Manual which teaches to leverage such ‘… traditional forms of navigation if, and when, electronic means of navigation are not available.’16

Look Out the Window. Of all things, too few people look out the window. A pilot highlighted its value in his memoir about flying B-26 bombers in World War II when he stated that his instructor said ‘Don’t be afraid to look out the window. It might just let you know that you are over Dallas instead of Waco, as you thought from your star shots.’19

Ham Radio Cybernetwork. A resourceful hobbyist developed a way to transmit and receive Internet traffic through a ham radio. To accomplish this, he developed a new protocol called ‘New Packet Radio’ or ‘NPR’ and used $80 worth of easy-to-assemble hardware. The result is an apparent ability to ‘send data via IPV4 up to 300 kilometers.’20

Software Defined Radio. Software-Defined Radio (SDR) enables transmitter and receiver modulation/demodulation through software instead of spinning a dial. This ability enables a single radio to constantly hop from one frequency to another to avoid congestion or, more importantly, to avoid enemy jamming. As a result, most updates are simple software downloads, negating the need for costly hardware changes.21

Morse Code. Morse Code, communication-based on dots and dashes of electrical pulses or flashing lights, still exists. While forgotten by most people, Morse Code remains in use in Aviation and Aeronautical fields since radio navigational aids such as VOR’s and NDB’s still identify in Morse Code. The US Navy and Coast Guard still use signal lamps to communicate via Morse Code.22

Hand Signals. For the first time in 30 years, the US Army has updated its Visual Signals manual for use when ‘electrical and/or digital means of communication are inadequate or not available’.23 Fighter pilots also use hand signals to communicate with wingmen when radios fail. For example, a hand moving horizontally above the glare shield, palm down, means level off while a hand moving forward means add power.24

Free Space Optics and Laser Communications. Free space optics, or FPS, uses high frequency modulated light pulses to transmit data through the spectrum. FPS can transfer data at the rate of tens of gigabits per second over a distance of ‘several kilometers near the sea level or even over 100 km at high altitude.’ Also important is its high immunity to both interception and jamming and it won’t interfere with other transmissions.25

The risks to NATO and our member nations when operating in a denied spectrum battle environment is clear. Whether at the command level or the grunt on the ground, when spectrum is denied, the effectiveness of NATO forces is reduced or eliminated. The good news is there are myriad alternatives to turn to, only some of which are mentioned here. What we need to do next is establish a list of spectrum-denied scenarios then train with tactics, techniques, and procedures that provide back-up solutions to meet each scenario. Indeed, by exploiting the tools and skills that we have today, we truly can survive until the promised future capabilities are deployed tomorrow. 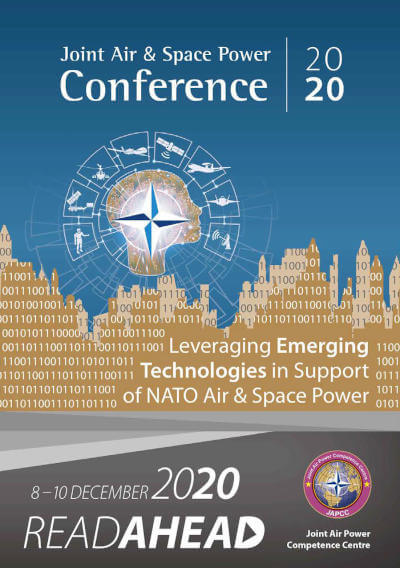