In 2013, the Hollywood movie ‘Gravity’ brilliantly ­depicted the effects that Space debris can have on objects orbiting the earth. The story is more fact-based than fiction. The Space Shuttle crew conducts an Extra-Vehicular Activity (EVA), working on a captured satellite. While the mission specialist and the mission commander repair a broken satellite ­panel, they are ordered to immediately abort the mission, execute the emergency satellite release procedure and return to the Space Shuttle. Two minutes later, the Space Shuttle is destroyed and the crew, except the mission commander and mission specialist, are killed. What happened? An Anti-Satellite (ASAT) weapon test created debris which hit other satellites and initiated a cascade of destruction, known as the Kessler Syndrome. The resulting cloud of debris took out the shuttle and killed the crew.

Is the story behind this movie science fiction or does it have a more serious background? Today, the amount of Space debris produced by mankind since the first rocket launch in 1957 has reached an alarming level. Such a destructive event in Space is only a matter of time.

In 2007, a Chinese ASAT test created more than 150,000 pieces of debris larger than 1 cm. Approximately 3,300 of these debris pieces are trackable with today’s sensors.1 The resulting debris cloud ranges from altitudes of 200 km up to almost 4,000 km, while the bulk of debris ranges from 800 km and 900 km.2 Today, more than 3,000 pieces of trackable debris are still on orbit and will remain there for decades. This ASAT test produced more than 18 % of today’s total debris population in orbit.

The 2009 collision of the Iridium 33 satellite with the Russian Cosmos 2251 satellite is the only other pub­lically known event to date that significantly increased the Space debris population. The two satellites collided with a relative speed of 11.57 km / s, creating another 2,500 trackable debris pieces in Low Earth Orbit (LEO) between 650 km and 900 km.3

In addition to these two sources of debris, there are other sources like dead satellites or payloads, upper rocket stages, mission related objects (MROs), solid rocket motor slag residues, paint flakes, multilayer isolation foils, fragments after the brake-up of satellites, and so on.

The figure below shows the Space Surveillance Network’s (SSN) tracking of Space debris larger than 10 cm. This data is continuously updated by the US Joint Space Operations Center (JSpOC).

Although there are natural effects (decay and re-entry) that lessen the amount of orbital debris, mankind is creating more debris rapidly than it is reduced by the Earth’s atmosphere. As a consequence, the risk of a collision on orbit is rising. In the worst case, this could produce a debris density on an orbit that would deny its future use for a very long time and increase the probability of mission failure while flying through that orbital band to reach higher altitude orbits.

Space is a congested, contested and competitive domain. Modern military forces are dependent on Space capabilities and the advantages they can bring to the fight. According to US doctrine, ‘Space Situational Aware­ness (SSA) is fundamental to conducting space operations. It is the requisite current and predictive knowledge of the space environment and the Oper­ational Environment upon which space operations depend’.5 The effects that resulted from the afore­mentioned Chinese ASAT test significantly raised the attention of scientists, politicians and military senior leaders as to the importance of SSA. But what is SSA?

There is no commonly agreed definition. The interpretation of SSA varies from academic, commercial, civilian and military users.6 For the purpose of this ­article, we will use the following definition:

‘SSA is the knowledge of Space-related conditions, constraints, capabilities, activities and the operational environment upon which Space oper­ations depend.’

This definition focuses on the military perspective and includes elements which can influence the Space System and the related activities in and outside the battle­space.7 The main purpose of SSA is to allow friendly forces to employ Space capabilities and exploit them to the maximum extent. SSA also provides information on adversary Space capabilities, enabling friendly forces to take appropriate countermeasures, i.e. deceiving, degrading, delaying or denying adversary use of Space.

A prerequisite to gain SSA is the ability to detect, track, identify and maintain custody of objects and events in Space. Based on the US Satellite Sensor Network sensor’s inputs, the JSpOC provides specific SSA information accessible via its ‘Space Object Catalogue’.8 This data is available to all levels of command (tactical to strategic) and supports observation, planning, execution and assessment.

The development, employment and operation of Space capabilities is an expensive business and is usually a nationally sensitive topic. Most Space-based capabilities are high demand, low density and require efficient and effective de-confliction.

As stated in the US Doctrine JP 3-14, SSA is a prerequisite to successfully conduct Space operations. Within the Alliance, a few nations argue that NATO is actually not conducting Space operations due to the fact that NATO does not own or operate satellites. This interpretation is short sighted, as command and control of satellites is only one element of Space operations. The core of NATO Space operations is the effective and ­efficient coordination of Space capabilities, products and services offered to NATO (nationally or commercially) to conduct operations.11 These capabilities and their operating environment must be incorporated into the NCOP.

Does NATO need to be fully aware of the entire Space Domain? – Definitely not! The basis for NATO’s Space Operations is outlined in AJP 3.3 (A). But it has to be understood that the Space Operation mission areas are interdependent and intrinsically linked. It is essential for NATO to have proper information continually derived from SSA to ensure Space Force ­Enhancement. Nevertheless, in the context of holistic thinking and to provide comprehensive recom­mendations to leadership, additional data and infor­mation regarding all Space operation mission areas are required.

Based on NATO’s dependency on Space and the associated threats, NATO has to start to actively define the required data and information that nations and commercial companies must provide to ensure an ­effective and efficient coordination of Space Force ­Enhancement capabilities. NATO also requires educated and trained personnel who ask the right questions in order to interpret and assess the possible impacts on operations and advise commanders.

Space Weather Effects. Solar activities can influence the Earth’s ionosphere and constrict the propagation of electromagnetic waves. As a consequence, SATCOM or GPS can be degraded, denied, disrupted, or even destroyed. Space weather prediction, as part of SSA, is able to provide timely regional forecasts and effects to the use of radio communication and GPS. This information enables planners and war fighters to create and apply contingency plans.

ISR and OPSEC. ISR satellites are able to provide ­images of different spectral wave lengths. Know­ledge on the orbital parameters and the capabilities of the sensors will help the ISR community to adjust observation windows, and help to support targeting and Battle Damage Assessment (BDA). Know­ledge of a potential adversaries’ Space based ISR capa­bilities will help NATO to optimize Operational ­Security (OPSEC).

For those scenarios, SSA can support BMD to identify the right target or provide optimized windows of ­engagement.

The Hollywood movie ‘Gravity’ impressively depicts how Space debris can degrade the use of Space. Today, the question is not IF debris will hit a spacecraft or other debris; the question is WHEN and WHERE, and WHAT the consequences will be to NATO’s warfighting capacity. Space is already congested, contested and competitive. This condition will become more acute as the use of Space grows.

Due to NATO’s Space dependency and the contribution Space brings to operations, NATO has to have situational awareness on Space, similar to the domains of Air, Land, Maritime and Cyber. Although SSA and data sharing are a very sensitive topics to the Space faring nations, NATO must define its level of required situational awareness in the Space domain, set requirements and establish exchange mechanisms to fulfil those requirements.

Due to NATO’s Space dependencies and the threats that are associated with the deprivation of use of Space capabilities, NATO would be well advised to:

1. NASA, ‘Orbital Debris – Quarterly News’, Volume 12, Issues 1, Jan. 2008, available from: http://orbitaldebris.jsc.nasa.gov/newsletter/pdfs/ODQNv12i1.pdf.
2. Kelso, T.S., Analysis of the 2007 Chinese ASAT Test- and the Impact of its Debris on the Space Environment, Technical Paper, AMOS Conference, Maui, Hawaii, 2007, available from: http://celestrak.com/publications/AMOS/2007/AMOS-2007.pdf.
3. A.Tan, T.X. Zhang and M. Dokhanian, Analysis of the Iridium 33 and Cosmos 2252 Collision using Velocity Perturbations of the Fragments, Advances in Aerospace Science and Applications, Volume 3, Number 1 (2013), pp. 3 – 25, Department of Physics, Alabama A&M University, available from: http://www.ripublication.com/aasa/aasav3n1_02.pdf.
4. The CSM is a fixed-format ASCII formatted message which contains information about a conjunction between a high-interest space object (hereafter referred to as ‘asset’ or ‘primary satellite’) and another resident space object, which will be referred to as the ‘conjuncting satellite’., www.space-track.org, CSM Guide, available from: https://www.space-track.org/documents/CSM_Guide.pdf.
5. US Joint Staff, JP 3-14, p. II-1.
6. As exapmles:
ESA: ‘SSA aims, ultimately, to enable Europe to autonomously detect, predict and assess the risk to life and property due to man-made Space debris objects, reentries, in-orbit explosions and release events, in-orbit collisions, disruption of missions and satellite-based service capabilities, potential impacts of Near-Earth Objects (NEOs), and the effects of Space weather phenomena on Space- and ground-based infrastructure.’ Source: http://www.esa.int/Our_Activities/Operations/Space_Situational_Awareness/About_SSA.
US JP3-14 Doctrine: ‘… is the requisite current and predictive knowledge of the Space environment and the OE upon which Space operations depend. SSA involves characterizing, as completely as necessary, the Space capabilities operating within the terrestrial environment and the Space domain.’, Joint Publication 3-14, Space Operations, US Joint Staff, 29 May 2013.
NATO, proposed by NATO STO: ‘NATO Space Situational Awareness is the knowledge and the understanding of military and non-military events, activities, circumstances and conditions within and associated with the Space environment or Space related systems that are relevant for current and future NATO ­interest, operations and exercises.’ NATO STO, SCI 229, available from: https://www.cso.nato.int/ACTIVITY_META.asp?ACT=2069.
7. The Space System is composed of the Space segment, terrestrial segment and the link. The Space segment contains all orbital elements, while the terrestrial segment is composed of the satellite and payload control as well as the end user element.
8. The US SSN is the most advanced sensor network in the world. It includes dedicated Space surveillance sensors, as well as contributing sensors (e.g. Missile Defence Radars). In addition to the US SSN, there are some Russian SSA sensors, as well as the French GRAVES and the German TIRA Radar. Until today, no other nation is able to achieve both quality and quantity of SSA data provided by the US.
9. The last NATO owned satellite, NATO IV, stopped operational service in 2010. http://www.nato.int/cps/en/natolive/topics_50092.htm.
10. These services are functions of the mission area of Space Force Enhancement as laid out in NATO AJP-3.3(A) – Allied Joint Doctrine for Air and Space Operations. Other mission areas are: a. Space Support – Space Lift, Reconstitution of Space Forces, Satellite Operations; b. Space Control – SSA, Offensive Operations, Defensive Operations; c. Space Force Application.
11. NATO Space ‘Operations Iceberg’ – Looming Danger of a Non-holistic Approach, JAPCC Flyer Edition 10, available from: http://www.japcc.org/publications/flyer/Pages/default.aspx. 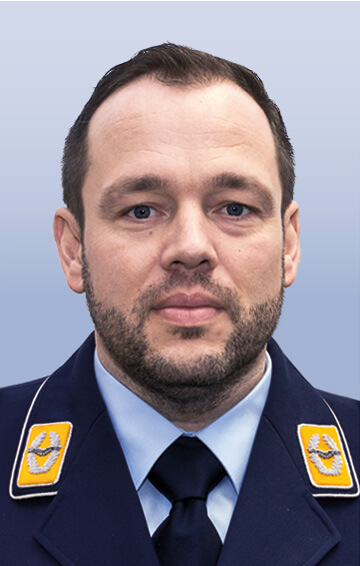 Lieutenant Colonel Steffen Neumann
serves as a Staff Officer in the Operations Branch of the German Space Situational Awareness Centre. He joined the German Air Force in 1996 and holds two Master Degrees in Aerospace Engineering and Business Administration / Project Management. His officer career includes tours of duty as Tactical Control Officer HAWK, Reconnaissance Officer PATRIOT and Conventional Arms Control Officer. He has more than 10 years’ experience in GBAD Command & Control and Operational Planning, including tours as company commander of a GBAD Maintenance / Supply Squadron and a PATRIOT Squadron. From 2012 to 2014, Lieutenant Colonel Neumann served as a Space SME at the Joint Air Power Competence Centre. He participated in the NATO ISAF mission as an Army Task Force Air Liaison Officer in 2010 / 11.

The article displayed has been published as part of the JAPCC Journal Issue 20. You can download the full Journal by clicking the image below.