Why is the Refocus on this Traditional Warfare Area Key for Modern Conflict?

If people talk about a modern conflict, most agree that such a conflict will be fought in all dimensions possible. The North Atlantic Treaty Organization (NATO) has a good view about threats it might encounter on land, on and below the sea, in the air, and in space. Furthermore, cyberspace is increasingly a bright focus area for NATO. Nations continue to develop new weapon systems to operate in these dimensions, but unfortunately, NATO initiatives have, in many cases, not embraced and developed the discipline of Electronic Warfare (EW). A generation of military professionals has grown up without thinking much about the vulnerabilities inherent in operational reliance on the electromagnetic spectrum.

In its EW policy,1 NATO defines Electronic Warfare as ‘a military action that exploits electromagnetic energy, both actively and passively, to provide situational awareness and create offensive and defensive effects’. It is warfare within the Electromagnetic Spectrum (EMS) and (shown in Figure 1) involves the military use of electromagnetic energy to prevent or reduce an enemy’s effective use of the EMS while protecting its use for friendly forces. 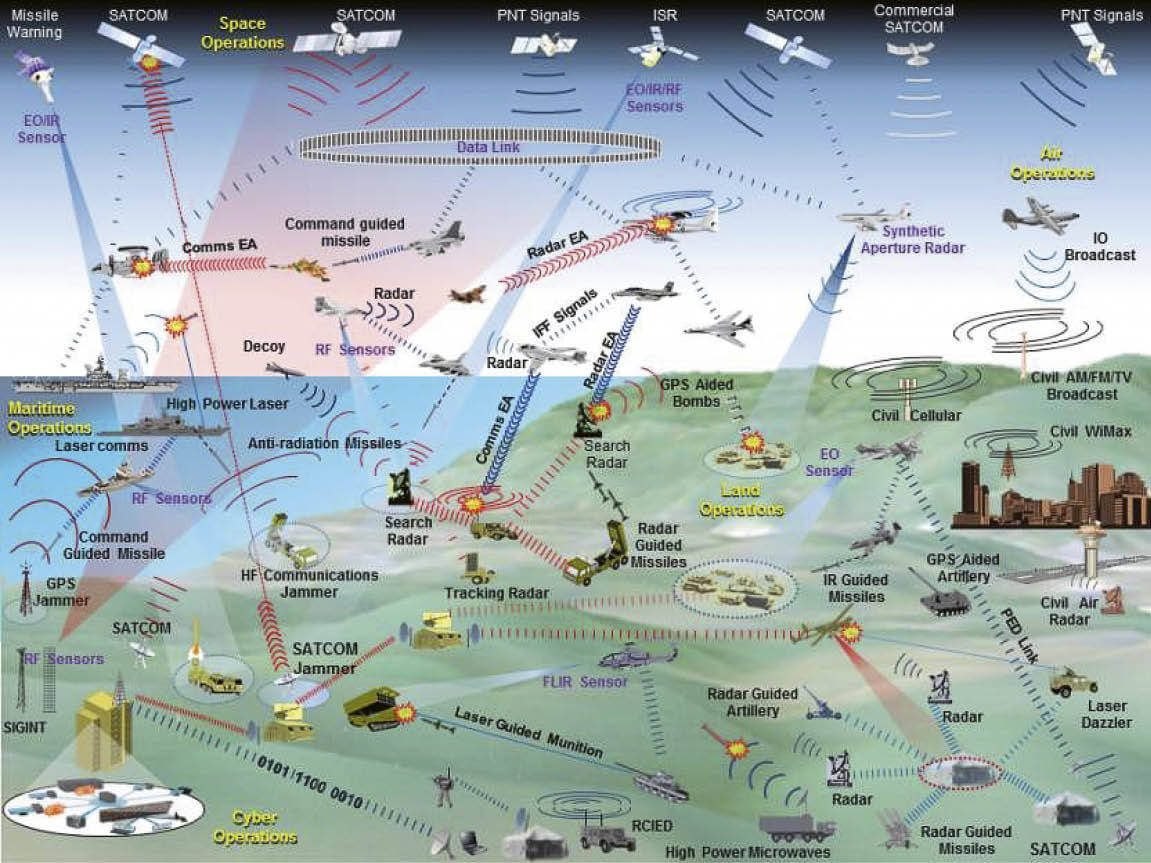 The lack of understanding of the implications of EW can have significant mission impact – even in the simplest possible scenario. For example, having an adversary monitor one’s communications or eliminate one’s ability to communicate or navigate can be catastrophic. Likewise, having an adversary know the location of friendly forces based on their electronic transmissions is highly undesirable and can put those forces at a substantial disadvantage. The purpose of this article is to highlight that EW is critical to modern operations and needs to be rapidly revived and reinvigorated in order to catch up and keep up with peer adversary advances.

Superior weapons and tactics have always conferred advantage in war, and the development of measures and countermeasures is a major thread running through the history of human conflict. Man’s use of electricity, electronics, and the electromagnetic spectrum in war has been no exception. In 1888, German Heinrich Hertz demonstrated that ‘electrical sparks would propagate signals into the space’.2 Soon after, militaries were employing this technology to improve their ‘conventional’ operations through advanced communications, navigation, targeting and battlespace sensing. This revolution in military affairs established the electromagnetic spectrum as a key component of military operations, a component that could be used to enhance a military’s capabilities or attacked to diminish their operations.

One of the first recorded applications of EW occurred in 1904 in the Russia-Japanese war, when the Russians successfully jammed Japanese naval communications signals being used to correct naval gunfire at Port Arthur.3

During the First World War, though not widespread, each side successfully conducted EW in the form of communications jamming. In addition, the French and British impacted German bombing operations by jamming and spoofing the electromagnetic signals being used by the Zeppelins for navigation. Events such as these merely served as a prelude for the EW activities to follow.

The major breakthrough for EW came with the inventions and development prior to and during World War II. Both the Allied and Axis Powers used EW extensively to attack radar, communications and navigation systems, in what Winston Churchill referred to as the ‘Battle of the Beams’.

Further advances in tactics and technology occurred during the Vietnam War as air tactics began to change in order to better benefit and counter EW capabilities. Through the Gulf War in 1991 and every conflict since, military forces have proven that dominance of the EMS is crucial for most military operations.

In the recent conflicts in Iraq or Afghanistan, the EW threat from adversaries was limited. The extent to which coalition forces employed EW was also limited, primarily to actions to defeat the threat of remote-controlled improvised explosive devices, mainly by using jammers.

In the face of such limited opposition, coalition and Alliance forces could use the EMS with few limitations. This enabled the uninterrupted use of the Global Positioning System (GPS) for navigation and heavy reliance on systems like the Blue Force Tracker.4 Friendly forces enjoyed virtually unhindered communications means for command and control. Old, valuable concepts such as radio discipline, electromagnetic signature control, and frequency hopping were less important in these environments. Therefore, over the years, the focus and devotion towards EW faded within NATO. Policies, plans, and doctrine slowly, but steadily, became outdated. EW training in forces throughout NATO lost focus and EW skills atrophied. Additionally, new, more publicly accessible capabilities like ‘Cyberwarfare’ emerged and dragged a lot of effort, resources, and attention away from traditional EW, which was to some degree viewed as the purview of high-end militaries and a threat that had faded with the demise of the Soviet Union.

However, recent developments in the security environment have led to a course change concerning EW. NATO has reemphasized the need to be alert and ready again against any emerging threat. Countries like Russia and China have significantly upgraded their capabilities to operate in the EMS. In Eastern Ukraine, Russian-backed forces used sophisticated jamming and interception tactics to undermine communications and surveillance drones. The proliferation of commercial technology in the telecommunications world has accelerated the development of numerous capabilities. With the growth of the commercial wireless market, many other countries now have technology able to operate within the EMS. The EMS environment is becoming more complex, congested, and contested, making it imperative for NATO to continually improve EW capabilities to enable reliable use of the EMS.

Due to both the evolution of how NATO conducts operations and the emerging technologies, the focus for EW has shifted from isolated operations in the EMS to joint Electromagnetic Operations (EMO) in the Electromagnetic Environment (EME). The EMS is defined as the entire distribution of electromagnetic radiation according to frequency or wavelength (Figure 2). Although all electromagnetic waves travel at the speed of light (in a vacuum), they do so across a wide range of wavelengths and corresponding frequencies. Therefore, the EMS comprises the span of all electromagnetic radiation and consists of many subranges, which people commonly refer to as spectral bands, such as visible light or ultraviolet radiation. The EME is the geophysical environment, influenced by such factors as terrain, weather and atmospheric conditions, which supports the radiation, propagation, and reception of electromagnetic energy across the entire EMS. 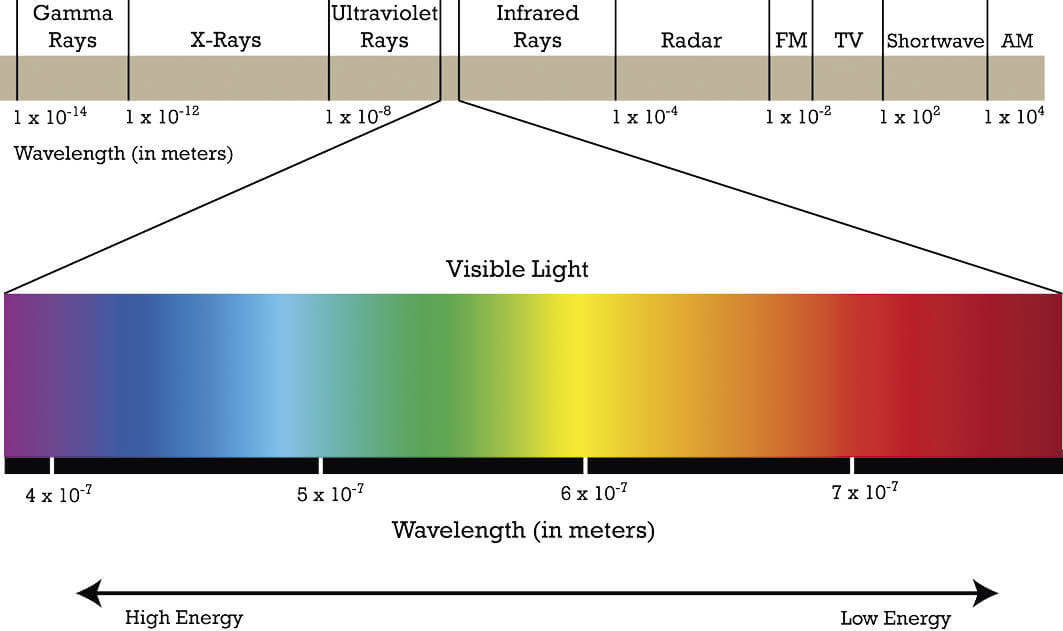 Within NATO, EMO involves the deliberate transmission and reception of EM energy in the EME for military operations such as communications, navigation, attack, battlespace awareness, and targeting. As shown in Figure 3, EMO not only enables operations in each domain but also provides the thread which links and integrates military forces across the domains and to the cyberspace and information environments.

Within the EME, EMO are conducted by both friendly forces and adversaries. As shown in Figure 4, these EMO often lead to a contested EME. In addition, these operations often overlap with the EM activities executed by neutral actors further leading to a congested EME. 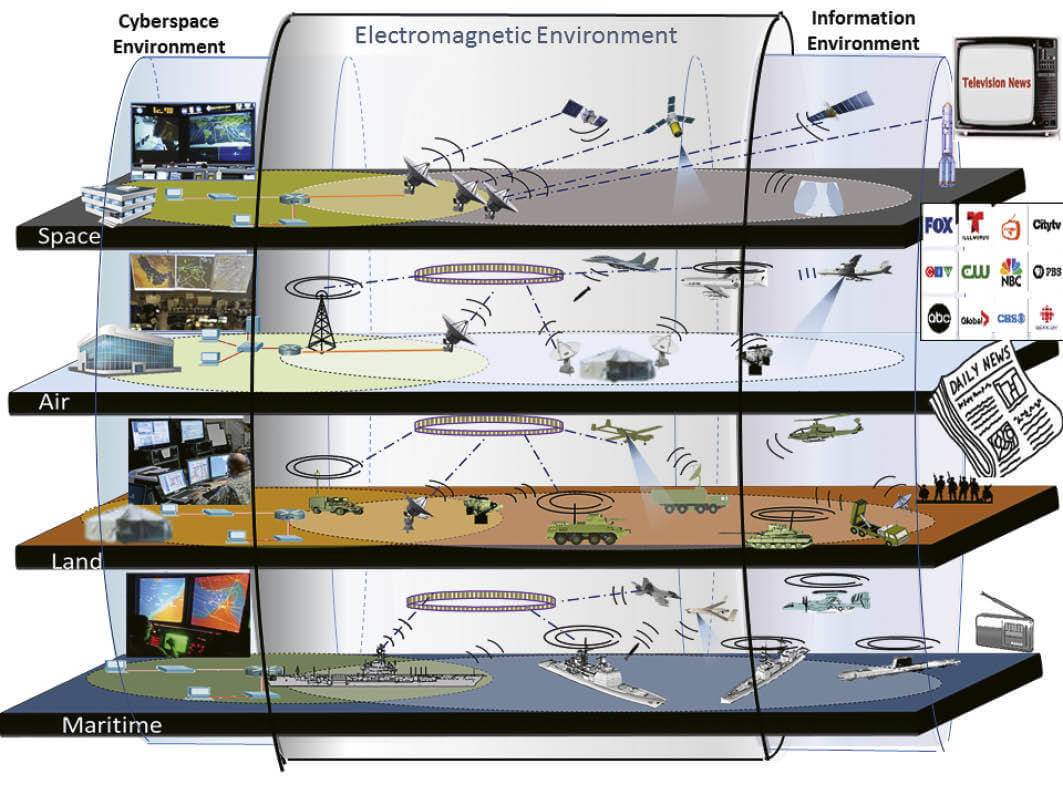 Today, the dependency of military operations upon utilization of the EMS is now a central facet of almost all military activities as military forces around the world have integrated EM capabilities into a vast majority of platforms, systems, and units. Without the freedom to conduct EMO and manoeuvre in the EME, the ability of militaries to achieve superiority in air, land, maritime, space and cyberspace will be placed at risk. The global increase in affordability and portability of highly sophisticated electromagnetic equipment guarantees that the EME will continue to create even more diverse challenges and modern militaries can be expected to try to deny the use of the EMS by their adversary. 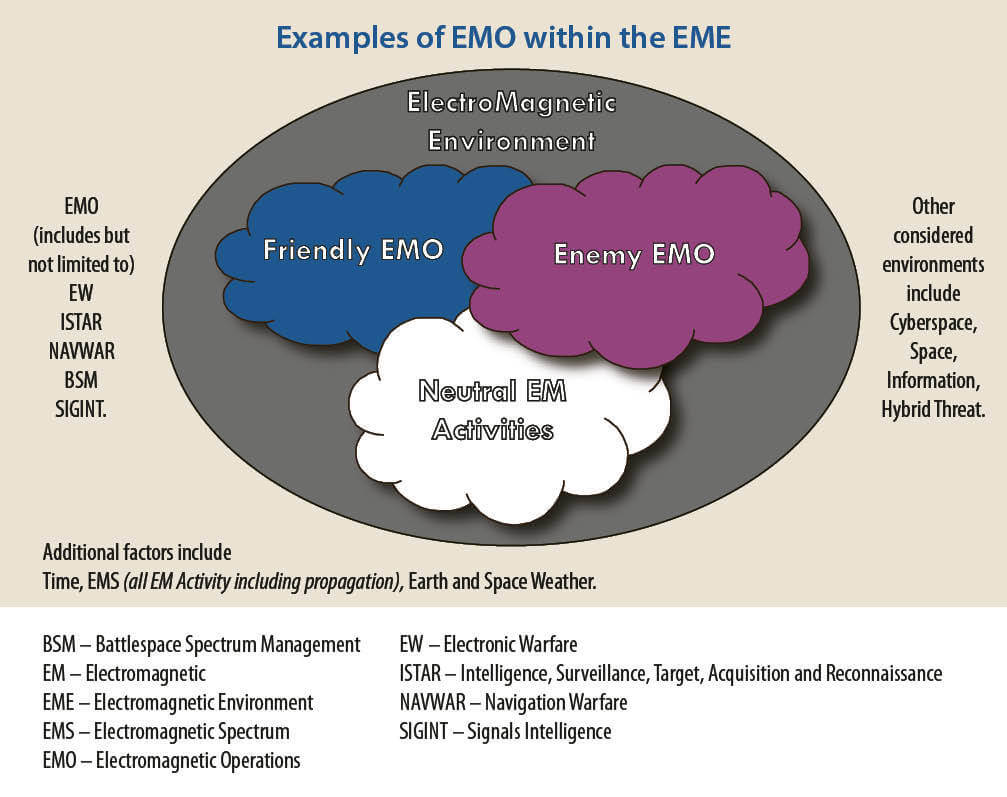 Several factors pose a challenge to NATO operations. First, the high EME usage by the military, civil sector, and adversaries produces congestion, which constrains NATO force manoeuvre. Also, our adversaries have modernized their own EMO by utilizing complex encryption and frequency diversity in communications systems and rejuvenating obsolete, spectrum-dependent systems, such as low-frequency radar, with upgraded hardware. They are also implementing advanced processing algorithms for navigation and battlespace surveillance that make their EM activity more difficult to counter. In addition, adversaries can use sophisticated technologies to attack NATO forces through the EME, denying or degrading a joint force’s ability to use the EME to communicate, navigate, and sense. The challenge for NATO commanders is to be able to dominate those elements of the EME they need to support NATO operations, at the time and location required, to achieve mission objectives while denying the same to the adversary.

NATO Strategic View of the EMS

For NATO forces, the EMS is an essential part of military operations, so much so that many Allied leaders now see the EME as an operational environment and a part of the battlespace where friendly forces manoeuvre in time, location, and spectrum to create electromagnetic effects in support of the commander’s objectives. In a manner equivalent to operations conducted in the air, space, land, maritime, cyber, and information environments, NATO forces will need to conduct EMO either sequentially or simultaneously. Military leaders will plan, orchestrate, and synchronize their EMO and resources based upon interpretation of the Joint Force Commander’s intent, operational priorities, and an intelligence assessment of the EME. Shaping the EME, using all means necessary to allow EMO to support operations across the entire battlespace, will be a critical enabler for mission success.

As the combat arm of EMO, EW capabilities for Electronic Attack (EA), Electronic Defence (ED) and Electronic Surveillance (ES) will provide the ability to manoeuvre in the EME and create desired effects that shape the electromagnetic environment, enhance situational awareness, protect friendly forces, and attack an adversary. NATO EW operations will enable military operations in the land, maritime, air, space, and cyberspace. They will support warfighting activities such as Navigation Warfare (NAVWAR), intelligence collection operations, suppression of enemy air defences (SEAD) and information operations (IO). At the joint level, planning for EW in NATO operations will begin in the Operations Planning Process to develop the electromagnetic order of battle and to identify the EW opportunities, capabilities and assets required to accomplish commander’s objectives. During operation execution, EW operations will be continually coordinated and integrated across all components to synergize the application of EW capabilities and to assure friendly forces have access to the EMS while denying its use to the adversary. In order to do this, the commander must not only empower an EW battle staff element to plan and execute EMO across the full Joint spectrum of conflict, but must also possess the tools and trained personnel necessary for that execution.

Electronic Warfare has been an afterthought for a quarter of a century, but the exponential growth of space and cyber technologies that rely, above all, on electromagnetic signals, a renewed sense of urgency to rebuild and recapitalize EW capabilities, both offensive and defensive. However, due to the increasing dependencies of modern military systems upon the EMS, commanders must understand the following:

The modern challenges of dealing with the high-end capabilities of peer and near-peer adversaries, especially in confrontations requiring operations in Anti-Access/Area Denial (A2/AD) environments, have brought EW back to the forefront. This means that NATO and nations must re-invest in modern EW capabilities, and build enough capacity in these capabilities to compete with peer competitors. NATO is presently rewriting its EW Doctrine and is investigating how to operate in the EMS more effectively. Future articles will examine modern EW capability and doctrine requirements, along with how NATO can best catch up.

‘EW has been a sleeping beauty, hidden away and forgotten for a generation. Now it is a dragon about to reawaken, and NATO leaders who continue to ignore its significance do so at the Alliance’s peril.’

4. Blue Force Tracking is a US military term for a GPS-enabled capability, that provides military commanders and forces with location information about friendly (and despite its name, also hostile) military forces.

The article displayed has been published as part of the JAPCC Journal Issue 27. You can download the full Journal by clicking the image below.